We will use your email address only for sending you newsletters. Please see our Privacy Notice for details of your data protection rights.

Brexit talks with the European Union have been declared “over” after the UK lamented Brussels’ inability to make concessions on key issues affecting the future trading relationship between the two sides. Former Brexit Party MEP Lance Forman suggested failure to move from the EU could be part of a “wait and see” strategy that will conclude following the US Presidential Election in November. Speaking to talkRADIO, Mr Forman said: “I suspect, and I don’t think this has been mentioned terribly much, but I just wonder whether the EU is holding off to see what happens with the American elections.

“If Biden were to win, I don’t think he will, but if he were to win maybe they think our position will be weakened in some way.

“And we’d scramble to do a last-minute deal with them because of fears of a US trade deal falling apart.”

The prospect of a new US-UK trade deal was marred when Democratic presidential candidate Joe Biden warned he will not agree to talks with the British Government if Brexit were to affect the Good Friday Agreement.

The warning came after Boris Johnson introduced his controversial Internal Market Bill in the Commons last month, citing a need to ensure the smooth running of internal trade in the event of a no deal Brexit.

The Prime Minister has been hoping to negotiate a new trade arrangement with the United States shortly after the end of the transition period.

US President Donald Trump signalled his support for the plan, and repeatedly committed to swift talks with Mr Johnson should he secure reelection.

But a bipartisan group of Representatives and Senators have warned they will not allow any deal to go through Congress unless peace in Northern Ireland was guaranteed in the aftermath of Brexit.

Mr Trump’s own envoy to Northern Ireland, Mick Mulvaney, also insisted the UK has been running the risk of “creating a hard border by accident” if no agreement is reached with Brussels.

READ MORE: Theresa May furious as Gove brilliantly explains how UK would THRIVE under no deal Brexit

Boris Johnson last week said the negotiations are now “effectively over” after ten round of talks with Brussels failed to bridge the gap on key issues like fishing or state aid.

But EU negotiator Michel Barnier on Monday committed to further “intensifying” talks as a sign of good faith after Michael Gove claimed it would be “meaningless” to hold additional talks as Brussels continues to refuse to budge.

Mr Gove said: “The conclusions of that council reaffirmed the EU’s original negotiating mandate, they dropped a reference to intensive talks that have been in the draft and they declared that all, all future moves in this negotiation had to be made by the UK.”

Writing on Twitter, Mr Barnier insisted the bloc is “available to intensify talks” in an attempt to bring back the UK to the negotiating table.

DON’T MISSBrexit breakthrough: Crucial reasons businesses will choose UK over EU [INSIGHT]’Thank goodness UK is out!’ EU torn apart by expert over wildlife [REVEALED]Redwood tears into ‘cynical’ EU in bid to use COVID-19 to trip up UK [UPDATE]

He wrote: “As stated by President @vonderleyen on Friday, I confirmed that the EU remains available to intensify talks in London this week, on all subjects, and based on legal texts. We now wait for the UK’s reaction.”

Mr Spisak said: “This is the moment No10 has been waiting for months: the Commission says yes to the joint legal text drafting.

See today’s front and back pages, download the newspaper,
order back issues and use the historic Daily Express
newspaper archive. 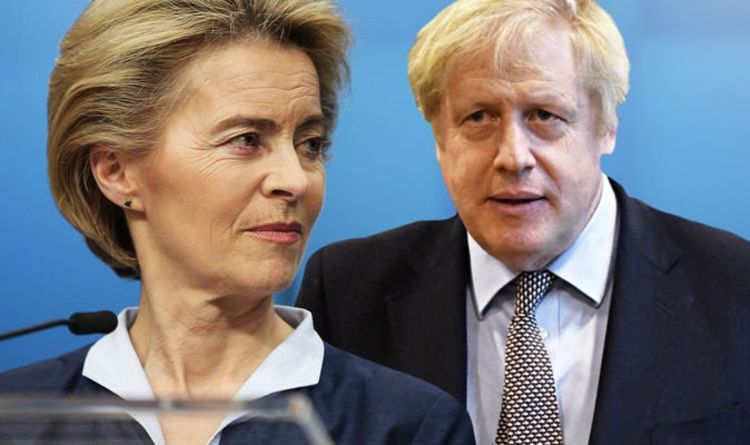 World News – United States – Horoscopes Dec 2, 2020: Britney Spears, be part of the solution, not the problem

World News – United States – Horoscopes Dec 2, 2020: Britney Spears, be part of the solution, not the problem