Everton have been linked with a move for Real Madrid’s attacking midfield star Isco, who is thought to be unwanted at the club.

The Toffees signed James Rodriguez from the Spanish giants in the summer, in what’s proved to be an excellent signing.

According to the Daily Mirror, Isco is no longer wanted at the Bernabeu and could leave in January.

He reportedly wants to reunite with the likes of Rodriguez and his former boss Carlo Ancelotti at Goodison Park.

The deal would likely involve a loan move from January until the end of the campaign.

Real would also want to include a compulsory buy-out clause at the end of Isco’s loan.

However, the compulsory buy-out clause could be one that Everton officials negotiate. They won’t want to be forced into buying Isco if he fails to make an impact.

Either way, it’s likely that the Spanish international would be a shrewd bit of business for the Toffees.

The transfer fee being touted is £18 million plus add-ons. That’s not much for a player of Isco’s quality, especially in the current market.

The Colombian, alongside forward Dominic Calvert-Lewin, has helped to push them to the top of the table.

Isco could help to improve their attacking options further. Given his pedigree, he would also bring plenty of experience to the squad.

He’s featured four times in La Liga under manager Zinedine Zidane this season. He’s being used sparingly by the Frenchman, who seems to prefer other players.

That means Everton could entice Isco to the Premier League with the offer of regular first team football.

Bale often cut an uninterested spectator on the sidelines when Spanish football returned in June.

Kylian Mbappe has officially announced his intent to leave PSG in the near future. Liverpool, Man Utd, Barca and Real are all interested.

Is there a single Premier League manager who is under significant pressure? It’s an odd situation.

Liverpool and Man United are both tipped to win, while Lord Bamford should score again.

Spurs v Brighton could see the Seagulls coming a cropper just like Southampton.

Man United v Arsenal is the highlight of the weekend. We talk diamonds, Mustafi v Rashford and more.

Luca Toni was big, underrated and damn sexy. Of course everybody loves him. 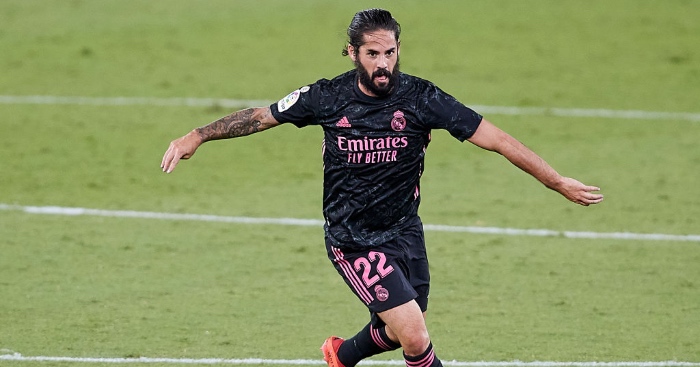