Democrat Barbara Bollier, who left the GOP two years ago, is outraising GOP Rep. Roger Marshall as she expands Democrats’ path to a Senate majority.

SALINA, Kan. — Kansas Senate candidate Barbara Bollier was a life-long Republican, but in 2018 she decided she’d had enough: Fed up by the party’s lurch to the right in Washington and Topeka, the 62-year-old state legislator divorced the GOP and became a Democrat.

Two years later, she’s asking Kansans to join her and do something they haven’t since Franklin Roosevelt was president: elect a Democrat to the Senate — and possibly make Chuck Schumer the majority leader in the process.

Bollier has a shot. The polls are tight, and both parties are deploying precious financial resources to close the deal. Yet while the suburban revolt against Trump is likely to drive turnout and huge margins in the Kansas City suburbs, Bollier needs a lot more than that in her bid against two-term GOP Rep. Roger Marshall.

So the Republican-turned-Democrat is barnstorming the state, hunting for other current or former Republican voters who share her view about the party’s rightward turn. She held six “lawn chair chats” and a “bring back your ballot” rally this weekend to stump and take questions from voters in Trump counties — easy to find, since he won 103 out of 105 in the state. But four of those seven she visited went blue in the 2018 governor’s race, and that’s where Bollier’s hopes lie.

He’s been in the Senate since 2003, but this year could be his last. POLITICO’s Andrew Desiderio traces Lindsey Graham’s transformation from a moderate Republican known for working across the aisle to a staunch defender of President Trump.

Two Republicans introduced her last Friday at an event in Council Grove: former GOP state legislator Tom Moxley and Nancy Kassebaum, the former three-term GOP senator, daughter of Alf Landon and wife of Howard Baker. Kassebaum said Trump-era Washington has become “toxic,” but Bollier would deliver “honesty and integrity” and a willingness to work across the aisle.

“We need that back in Washington, and that’s why a Trump person can vote [for me],” Bollier said in an interview later that day, after rallying 100 voters wrapped in blankets, jackets and masks, sitting socially distanced in lawn chairs in a grass field. “They want change — they can have that. But they know I’ll stand up to him. And believe me, I will.”

As President Donald Trump’s polling sags across the country, Kansas is one of five red states where Senate Democrats are on offense in an attempt to widen their path to a majority next year. Trump is favored to carry all of them — though by smaller margins than he did in 2016 — and Democratic Senate candidates must find a way to win over a slice of his voters.

Bollier doesn’t talk about flipping the Senate in her stump speech, nor does she mention Trump. She fielded just one question explicitly about the president at four of the events POLITICO attended throughout the weekend.

But she’s happy to talk about Sam Brownback, the former governor whose massive tax cuts devastated the state’s budget, which drove her from the party and helped Democrats flip the governor’s mansion in 2018.

Bollier doesn’t need to win most of these rural counties. But she does need to make sure Marshall doesn’t carry them in a blowout. Moxley, the retired GOP legislator, joked that those areas are so conservative that they “spray for Democrats.” But he said Marshall and Trump have created an opening.

“Barbara, her fealty is to the Constitution and her constituents,” Moxley said. “His fealty, appears, he has said it many, many, many, many times, [is] to Trump.”

Operatives in both parties agree Kansas is a margin of error race, and some recent polling has shown Bollier ahead. But Marshall dismisses any suggestion that standing by Trump is at all a problem.

“Tell them, first of all, thank you for suggesting that,” Marshall said when asked about assertions that he’s aligned himself too completely with Trump. “We have been a great supporter of the president’s policies, and I’m very proud of his policies. His policies are consistent with Kansas values.”

He had just finished bumping fists and taking pictures on an overpass above Interstate-70, where at least 75 Trump supporters arrived Saturday morning with American flags and Trump banners, donning red and blue Trump hats for a weekly ritual rallying drivers on the highway. Marshall thanked them for supporting the president, with the wind whipping and semi-truck horns blaring on the freeway below. Several of the voters here dismissed Bollier’s GOP backers as “RINOs” — Republicans in Name Only.

“Bob Dole’s endorsement is worth all those pretenders put together,” Marshall said of the longtime Kansas senator and former GOP presidential nominee. “I think it’s a very small, small, small number of Never Trumpers, and it’ll backfire.”

Bollier has a massive fundraising advantage in the race: She hauled in $13.5 million in the third quarter, compared to $2.9 million for Marshall. Republican outside groups have worked to make up the difference. Senate Leadership Fund, the super PAC run by allies of Majority Leader Mitch McConnell, has invested nearly $12 million in the race and the National Republican Senatorial Committee has added more than $3 million, according to data from Advertising Analytics. Duty and Country, a Democratic super PAC, has spent $5.5 million.

The attack ads are vicious, and they’re getting noticed. The first question in Council Grove was a voter asking about an ad from Senate Leadership Fund that morphs Bollier’s face with House Speaker Nancy Pelosi’s. Bollier laughed, said she’d never met Pelosi, and she wouldn’t be a “sheep” for party leadership.

At several stops, she was also asked about an ad from Marshall’s campaign hitting her for a vote she took in the state legislature on a bill intended to harshen penalties for people who don’t report child abusers. The ad calls her “extreme” because she was the only legislator out of 124 to vote against the bill. But she pushes back, arguing that the legislation was poorly written and did not do what was intended, also pointing out the state Senate never even took the bill up for the same reasons.

She also fielded questions on abortion — she defends a “private physician, patient relationship” — and guns. One voter, who identified himself as a Democrat, said he has a sign in his yard supporting her and was asked by a neighbor if he was afraid she’d take his guns away.

The question came after Republicans highlighted a clip of her talking positively about Australia’s gun buyback program. Bollier said she grew up hunting and supports gun rights, adding that she approves of background checks but would “never support” confiscating guns.

He called her “extreme” in the interview, pointing to the Green New Deal and Medicare for All, saying Bollier “accepted those values, and then she became a Democrat.” He also criticized her support for Medicaid expansion saying, inaccurately, it was “the same thing as Medicare for All, for all practical purposes.”

But Bollier opposes both Medicare for All and the Green New Deal. She supports Medicaid expansion and backs a public option, and she consistently criticizes Marshall’s votes against the Affordable Care Act. Voters ask about health care protections at nearly every event. She’s also willing to praise Trump, pointing to his administration’s investment in rural broadband in the state as a positive.

Bollier, an anesthesiologist, has emphasized masks and social distancing at her events, and criticized Congress’ inability to pass another round of stimulus. She said she would be willing to compromise, but did not have a position on the GOP-backed bill in the Senate, which Democrats have blocked, labeling it insufficient. Marshall, an OB-GYN, defended the Trump administration’s response to the pandemic and said he respects the virus, but added, “We can’t let this virus rule our lives.”

A lire aussi
World News – GB – Statement by the Prime Minister in the House of Commons on coronavirus regulation: December 1, 2020

Marshall wasn’t Republicans’ top pick for the seat. GOP officials publicly courted Secretary of State Mike Pompeo, the former congressman from Wichita. He declined, and they faced a protracted primary and a mad dash to block Kris Kobach, who lost the 2018 governor’s race. Marshall ended up defeating Kobach handily in the primary, but the fight — and some big money meddling from a top Democratic super PAC — took a toll, and the race has stayed close.

Republicans in Washington have been frustrated by Marshall’s fundraising, but he kicked into higher gear in the past quarter, raising three and a half times more than the previous six months. Bollier still swamped him, riding the national Democratic fundraising wave.

“There is no playbook in Kansas for how to run against a candidate with $25 million from New York, California and D.C.,” said Dave Kensinger, a veteran operative in Kansas. “Marshall has had to write that playbook as it goes, and that’s a big challenge. But they’re getting done what they have to get done.”

Kensinger and other party operatives predicted the state’s partisan tilt would win the day. GOP Sen. Pat Roberts, who is retiring, creating the open seat, entered the final weeks of the 2014 election locked in a tight race with independent Greg Orman. Republicans launched a late-stage rescue mission for his campaign. He won by 11 points.

But that year was a wave for Republicans, who rode into power during the “six-year itch” midterm election of then-President Barack Obama. This year, Democrats have the momentum, and Bollier is riding it.

“It’s the first time I’ve ever had a party standing with me,” Bollier said, standing in a brisk chill outside an event Sunday morning in Wichita. “It is an amazing experience.” 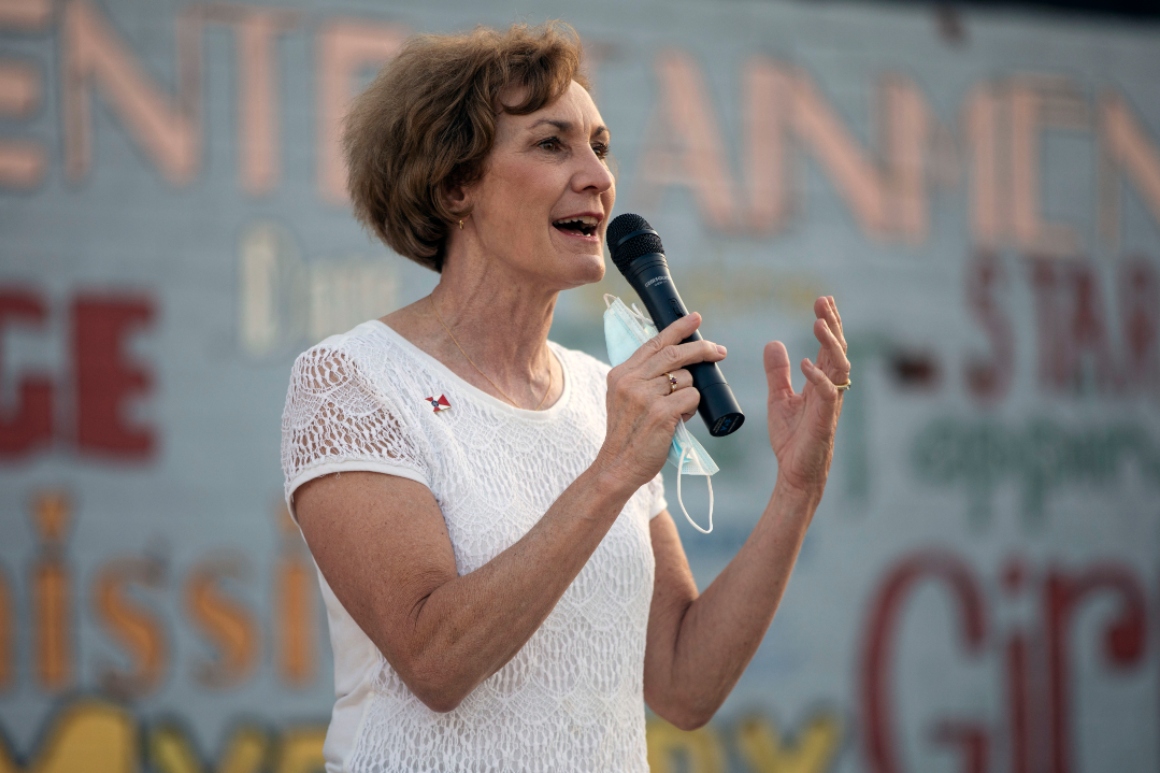