The Biden campaign has trumpeted its success with small donations, but in the last six months it has raised almost $200 million from donors who gave at least $100,000. As sums have grown, transparency has diminished.

One Monday evening last month, Hillary Clinton and Senator Kamala Harris, and two actors who portrayed them on “Saturday Night Live,” Amy Poehler and Maya Rudolph, gathered for a virtual fund-raiser benefiting the Biden campaign. By all accounts, the livestream was a smashing success: about 100,000 people watched and donated. The event raised $4.4 million.

While Mr. Biden’s campaign has trumpeted the small donations flooding in at record rates, the elite world of billionaires and multimillionaires has remained a critical cog in the Biden money machine. And as the size of checks has grown, the campaign has become less transparent, declining so far to disclose the names of its most influential check collectors, known as bundlers.

From Hollywood to Silicon Valley to Wall Street, Mr. Biden’s campaign has aggressively courted the megadonor class. It has raised almost $200 million from donors who gave at least $100,000 to his joint operations with the Democratic Party in the last six months — about twice as much as President Trump raised from six-figure donors in that time, according to an analysis of new federal records.

This parade of industry giants delivered a surge in donations even as the progressive base of the Democratic Party agitates against the influence of billionaires and corporate titans. A group of progressives, including Representative Alexandria Ocasio-Cortez, signed a letter last week that reads like a warning shot to a potential Biden administration, urging the Senate to reject any future executive branch nominations of corporate lobbyists or corporate executives.

“Joe Biden says this is ‘Scranton versus Park Avenue’ but then he’s raising hundreds of millions of dollars from the Park Avenue types,” said Tyson Brody, a former research director for Senator Bernie Sanders who is supporting Mr. Biden this fall but wants to see less influence for wealthy donors.

Progressives have mostly set aside their differences with Mr. Biden to focus on the shared goal of defeating Mr. Trump, including over campaign finance. But should he win, Mr. Biden is expected to face pressure from the left on a range of issues, including climate change, expansion of the Supreme Court and elimination of the Electoral College.

“Joe Biden is running against the most corrupt and dishonest president in our history, and has done so while maintaining a standard of transparency and integrity that is far above how his opponent has conducted himself this campaign,” said T.J. Ducklo, a spokesman for Mr. Biden.

For Mr. Biden, six-figure donors have been critical in delivering him a surprise financial advantage over Mr. Trump. The Democratic challenger entered October with $180 million more in the bank than Mr. Trump combined with their political parties — coincidentally almost the same amount that $100,000-plus contributors have given him.

Yet as Mr. Biden has vacuumed up giant checks, his campaign has quietly curtailed some of the transparency measures that he had pioneered in the primaries, when he became the first candidate to open up big-money fund-raisers to the press. To further loosen some donor wallets, the Biden campaign has been holding closed-door events with some of the candidate’s top policy advisers, offering access to potential key decision-makers in a Biden administration.

And Mr. Biden has broken with the precedent of the last four Democratic presidential nominees and declined to reveal the identities of some of the most important money-raisers in the general election: those bundlers who gather checks on behalf of the campaign.

“It’s troubling that the public is in the dark about these people because they are often promoted to ambassadorships, or other prominent positions in the administration or receive government contracts,” said Michael Beckel, an investigator and research director for Issue One, a group that pushes for campaign-finance transparency.

After being contacted this week by The New York Times, the Biden campaign said it would disclose its bundlers by the end of the month.

Mr. Biden is still disclosing more about who is funding his campaign and how much access those donors are getting than Mr. Trump, who has kept his fund-raisers with big contributors entirely behind closed doors, including some events held at his own businesses where he simultaneously profits.

Mr. Trump began by self-funding his 2016 campaign during the primaries, vowing to be independent and decrying the influence of major contributors. Instead, he has relied entirely on the largess of others in his re-election. And he has declined to name his bundlers in 2016 and 2020.

Many campaign reformers see Mr. Biden as a stark improvement over Mr. Trump but hoped he would clear a higher bar.

Mr. Biden’s campaign does carefully tally what bundlers raise, and there are various tiers for Mr. Biden’s bundlers to achieve; the highest level (a “Biden Victory Partner”) is set at $2.5 million, according to an internal campaign document and people familiar with the process.

Mr. Biden has disclosed his bundlers only once, burying the announcement on the Friday after Christmas 2019 during the primary season. He revealed 235 people who had raised at least $25,000. Mr. Biden has raised more than $1.2 billion since then without additional disclosure.

Biden officials note that their candidate has actually raised more online from grass-roots supporters in recent months than from big donors, and that virtual events have reduced the level of access for six-figure checks down to a Zoom screenshot.

In the 2020 primary, Mr. Biden opened up all his fund-raisers to a small group of reporters, known as a press pool, who could attend and listen to his remarks. The move was partly an effort to blunt criticism from his more progressive rivals, Mr. Sanders and Elizabeth Warren, who declined to hold big-donor events, casting them as corruptive. Other rivals eventually followed Mr. Biden’s lead.

Yet after Mr. Biden became the presumptive nominee and the donation limit skyrocketed — from $2,800 in the primary to more than $700,000 now, including party funds — his campaign pulled back on its transparency. Instead of allowing that press pool to watch virtual events with the biggest donors, there has often been only a call-in line provided, obscuring the ability to see who is attending.

Rufus Gifford, Mr. Biden’s deputy campaign manager, called the change “a new format as we enter a new phase of the general election campaign” after it was first implemented unilaterally for a Wall Street fund-raiser in May.

Since then, Mr. Biden’s campaign has also cut off press access to some of his full discussions with his biggest donors, with aides declaring the candidate would engage in a “virtual photo line” after only a couple of questions. In reality, the private conversations between Mr. Biden and his financiers can last as much as an hour longer, according to participants, including the one with Mr. Saban.

The campaign has also been offering access to Mr. Biden’s policy brain trust for donors willing to pay to attend virtual events and “conversations,” according to event invitations.

Among those who have been featured are Tony Blinken, Mr. Biden’s former national security adviser; Jake Sullivan, a top domestic policy adviser; Stef Feldman, the campaign’s policy director; Mr. Biden’s chiefs of staff when he was vice president (Ron Klain, Steve Ricchetti and Bruce Reed) and Michèle Flournoy, a possible pick to lead the Defense Department.

All those events are kept private; donors must pay extra for a more intimate “clutch” with the featured Biden adviser.

Some events are quite targeted, featuring a top economic adviser like Ben Harris (twice in recent days) or Mr. Reed (on “the future of energy”). The donation level to attend one clutch this month for an event advertised as “Making Government Great Again: A Virtual Conversation With Two Biden Alums on Leading and Managing the Federal Workforce” was $10,000 or $25,000.

Mr. Brody, the former Sanders aide, said the sessions allowed the wealthy “special access to the people who set the rules” and an exclusive policy preview. “Wouldn’t you like a ticket to hear from your future regulator what they’re going to do to your industry?” Mr. Brody asked. “That’s what they’re doing.”

Mr. Biden does not accept money from federal lobbyists. But the Democratic National Committee does, and as Politico first reported, Mr. Biden’s advisers have appeared at some virtual fund-raisers organized by lobbying firms — including Mr. Ricchetti, his campaign chairman and a former lobbyist.

“The country is in an existential crisis,” said Steve Elmendorf, a lobbyist and Democratic fund-raiser. “Anyone who wants to help get rid of Donald Trump we ought to invite on the team.” 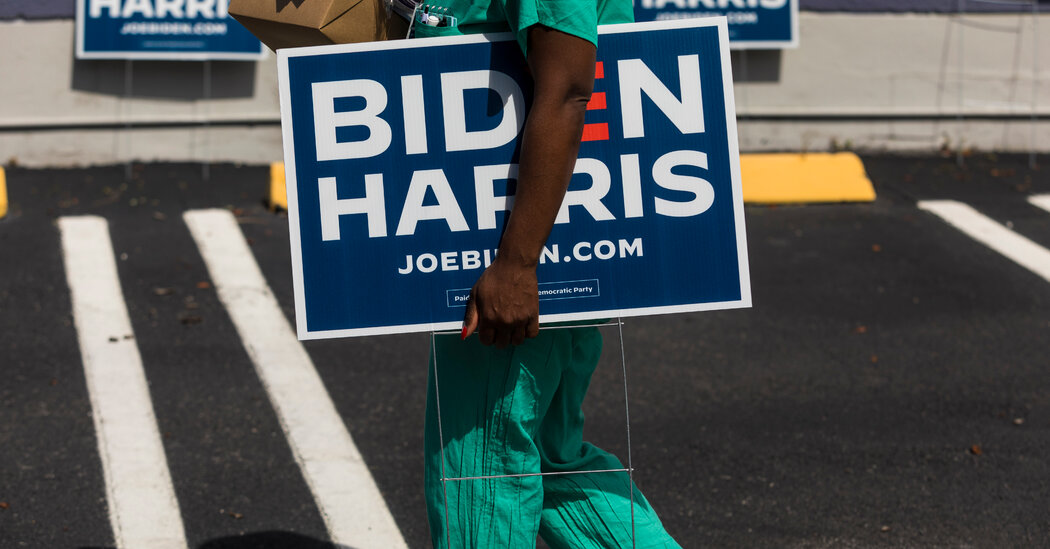