The Most Vulnerable Incumbent In The House Is A Democrat, But Republicans Are Defending More Competitive Seats

In the face of a whirlwind presidential campaign and massive fundraising numbers coming out of marquee U.S. Senate contests, it’s easy to overlook what’s happening in the race for the U.S. House of Representatives. That might be because Democrats look like strong bets to hold onto power there. In fact, FiveThirtyEight’s forecast is most confident about the House, as the Deluxe version of our model gives Democrats a 95 in 100 shot at retaining control of the House, better than Joe Biden’s 88 in 100 chance of winning the presidency or the Democrats’ 74 in 100 chance of capturing the Senate.1

However, even if Democrats do hold onto the House, that doesn’t mean they’ll retain every seat they control. In fact, there are a number of seats they might lose, including that of Minnesota Rep. Collin Peterson, the most vulnerable House incumbent seeking reelection in 2020. The Deluxe version of our House forecast only gives him about a 1 in 4 shot of winning in Minnesota’s 7th Congressional District against Republican Michelle Fischbach.

Peterson’s chances come down partly to the makeup of his rural district in western Minnesota. The 7th Congressional District is 26 points more Republican than the country as a whole, according to FiveThirtyEight’s partisan lean metric,2 making it the most GOP-leaning House seat held by a Democrat. Seeking his 16th term in office, Peterson has won past elections as a Democrat thanks to his moderate views, his anti-abortion stance and his focus on agricultural issues. And as the chair of the House Agriculture Committee, he’s been very attentive to farming interests, especially the sugar beet industry, which is important to his constituency. Still, the rightward shift in his district in the last decade or so narrowed his margin of victory to about 4 points in 2018.

But beyond the seat’s increasingly deep red hue, Peterson is up against his most daunting challenger in years. Fischbach served as the state’s lieutenant governor and, before that, as president of the Minnesota Senate. And unlike recent Peterson opponents, Fischbach has nearly matched his fundraising. On top of that, Republican groups have spent $5 million on her behalf, while Peterson has received a little less than $4 million in outside support. It’s no wonder then that the expert handicappers at The Cook Political Report, Inside Elections and Sabato’s Crystal Ball all rate this race as a toss-up, which factors into the Deluxe version of our forecast.

However, despite Peterson’s trying circumstances, the good news for Democrats is that his vulnerability makes him a rare bird in 2020. Of the most endangered Democratic-held House seats, Democrats are clear underdogs in just Peterson’s district. In fact, as the table below shows, Democrats are slightly favored in most competitive seats they are defending (races where they have less than a 3 in 4 shot of winning). Just two other Democratic incumbents face toss-up races: Rep. Kendra Horn in Oklahoma’s 5th Congressional District and Rep. TJ Cox in California’s 21st Congressional District.

Democratic-held seats that Democrats have less than a 75 in 100 shot of winning in the Deluxe version of FiveThirtyEight’s House forecast, as of 4:30 p.m. on Oct. 19

Horn’s race is particularly close, as the district is still heavily red (13 points more Republican than the country as a whole) and she won in 2018 by just 1 point. Meanwhile, Cox is defending more Democratic-leaning turf, but he’s faced scrutiny over owing back taxes and is running against former Republican Rep. David Valadao, whom Cox edged out by a slim margin in 2018 (less than 1 point). And in California’s top-two primary system back in March, Cox trailed Valadao by 11 points, which could be a poor harbinger for the freshman incumbent.

These three seats, plus the others where Democrats are marginally favored, could be especially vulnerable if things go better for Trump than currently expected. Nevertheless, Democrats are helped out by the fact that they have incumbents running in all but one of these seats, and 12 are freshmen incumbents who have raised huge sums of money.

By comparison, Republicans find themselves defending far more vulnerable seats than Democrats despite controlling fewer seats overall. This is mostly thanks to redistricting, retirements and the Democratic-leaning electoral environment. As the table below shows, GOP candidates are underdogs in three Republican-held seats, roughly 50-50 in nine others and have less than a 3 in 4 shot of winning in 13 more.

Republican-held seats that Republicans have less than a 75 in 100 shot of winning in the Deluxe version of FiveThirtyEight’s House forecast, as of 4:30 p.m. on Oct. 19

Two North Carolina seats are almost surefire Democratic pickups due to court-ordered redistricting, while retiring Rep. Will Hurd’s seat in Texas’s 23rd Congressional District is leaning toward the Democrats, too. Retirements and primary losses have left five of the nine GOP toss-up seats open, which helps Democrats even if the incumbency advantage isn’t what it once was. Lastly, the 13 seats that lean toward Republicans are all seats that could conceivably flip toward Democrats if 2020 is another “blue wave” election.

Put it all together and you can see why the Democrats’ chances of holding onto the House look pretty good, even if they do have the most endangered incumbent up in 2020.

The Senate numbers are based on the Deluxe version of the model, which is the default version of our congressional forecasts this year.

News – The Most Vulnerable Incumbent In The House Is A Democrat, But Republicans Are Defending More Competitive Seats 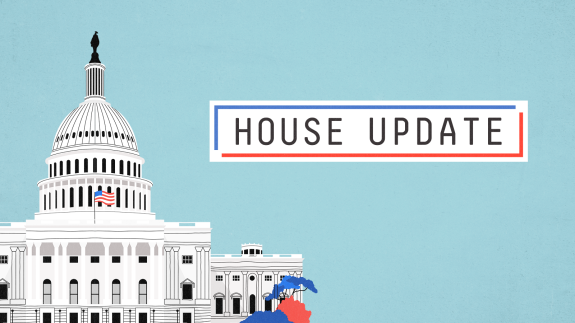