Nearly two weeks ago, President Trump told Americans that they would soon be getting an antibody treatment that he had promoted, without evidence, as a âcureâ for the coronavirus. This weekend, as the country braced for another major wave of coronavirus infections, Mr. Trumpâs health secretary promised such therapies were just around the corner.

But these statements are misleading, at best. Even if the drugs are proven to work â still a big if â thereâs little chance that they will soon be widely available. A smooth distribution of the antibody treatments will be dependent on the very same factors that have so far bedeviled the countryâs response to Covid-19: fast and plentiful testing, coordination between state and federal officials, and equitable access to health care.

Supply will be extremely limited at first, even though the pool of patients who might benefit is vast, raising messy questions about who should be first in line for treatment. The drugs are believed to work best in people who have recently been infected and are not yet very sick.

âIt is just a setup for everything challenging about the pandemic that weâve had until now, which is confusion, inequity, delays, reliance on testing,â said Dr. Walid Gellad, the director of the Center for Pharmaceutical Policy and Prescribing at the University of Pittsburgh. The therapies are promising, he said, but with âeverything thatâs gone wrong, itâs going to accentuate the problems.â

Roughly 60,000 Americans are testing positive for the coronavirus every day, yet the company that provided the presidentâs antibody treatment, Regeneron, has said it will have only 50,000 doses initially. Eli Lilly, which is developing a similar product, has said it will have 100,000 doses at first. Regeneron will eventually have 300,000 doses, and Eli Lilly will have up to one million before the end of the year. Both companies have applied to the Food and Drug Administration for emergency authorization of their products.

Administering the treatment is not as simple as handing out a bottle of pills. The therapies are given intravenously, requiring an infected person to visit a medical clinic or a hospital.

Thatâs assuming that the distribution will go smoothly. Officials with Operation Warp Speed, the government effort to speed treatments and vaccines to market, recently told reporters that the federal government would hand over to states the job of allocating the initial doses of Regeneron drugs. But those state agencies are overwhelmed from handling the current influx of new cases, as well as from planning for the distribution of coronavirus tests and future vaccines, and have not yet made detailed plans for deciding how to allocate the antibody treatments to hospitals and clinics.

âWe really have a lot going on, and this has not been front and center,â said Dr. Marcus Plescia, the chief medical officer of the Association of State and Territorial Health Officials.

Even some company executives have acknowledged that the country may not yet be up to the challenge. Dr. George Yancopoulos, the president and chief scientific officer of Regeneron, said in a recent call with investors and reporters that communities would need to have rapid testing and contact tracing in place to identify the best candidates for the treatments.

âWe, as a society, are literally trying to fly a plane while weâre trying to build it here,â he said.

Early data about the therapies have shown that they help clear the virus in people who have recently been infected, and that they may help prevent hospitalizations. In another positive sign, the F.D.A. recently approved an Ebola treatment made by Regeneron that uses the same technology.

Eli Lilly and Regeneron have said the antibodies might be used both as a treatment for those who are sick and to prevent infection in people who have been exposed. The treatments could serve as a bridge to a vaccine, protecting high-risk groups like nursing home residents and the workers who care for them.

Still, itâs unclear when the F.D.A. will give a green light to emergency authorization. Regulators must review a mountain of data and decide which groups might benefit the most. Last week, a government-backed clinical trial testing the Eli Lilly therapy in hospitalized patients was paused for unspecified safety reasons, and it will not restart until at least Oct. 26.

If an emergency authorization does come through, Regeneronâs first 300,000 doses will go to the federal government, thanks to an advance purchase agreement. Those initial doses will be free of charge to Americans.

Eli Lilly has not made a similar deal, but at a recent news conference, the chief executive, David A. Ricks, said âconversations are ongoingâ with Operation Warp Speed.

There are also likely to be questions about whether wealthy or well-connected patients will be able to unfairly move to the front of the line. Few would argue that the president should not have been given emergency access to Regeneronâs treatment, given the national security stakes. But itâs unclear what criteria Eli Lilly used when the drugmaker cleared its treatment for Chris Christie, the former governor of New Jersey. (A spokeswoman for Eli Lilly declined to discuss specific cases, citing patient privacy, but she said the company approves such treatments on a case-by-case basis in âexceptional circumstances.â)

Dr. Douglas B. White, a medical ethicist and professor of critical care medicine at the University of Pittsburgh School of Medicine, said he hoped hospitals would apply the lessons they had learned when another experimental Covid-19 drug, remdesivir, was initially scarce. Then, too, the federal government asked states to take responsibility for how the drug was allocated.

Dr. White wrote guidelines that were adopted by Pennsylvania that recommended giving priority to people from economically disadvantaged communities, who are at higher risk of dying from Covid-19. The same rules should apply to the antibody treatments, if they are in short supply, he said.

Dr. Plescia, of the state health officials group, said he believed that most states had worked out the kinks that occurred with remdesivir. Now, he said, âI think thereâs a distribution chain in place that could be adapted to this.â

In early trial data released by Eli Lilly, 5.8 percent of people who received a placebo were hospitalized or visited an emergency room for Covid-19, compared with 0.9 percent of people in the group that received the antibody treatment. Figuring out who will benefit the most is an enormous challenge, because most people will recover on their own.

Geoffrey Porges, a pharmaceutical analyst with SVB Leerink, an investment bank, said that means that 100 patients would need to be treated to prevent about five from going to the hospital. âThatâs expensive and complicated, and you donât know who the five are that would have gone to the hospital,â he said.

And because the treatments will be given to newly infected people, doctors will need a rapid turnaround in testing to quickly identify patients.

In Regeneronâs case, an antibody test may also be needed to identify patients whose immune systems are not responding. Dr. Yancopoulos acknowledged that such easy and fast tests were not yet widely available, and said that Regeneron was working with Roche to develop tests that could help doctors identify the right patients. In a statement, Roche said it was identifying which of its tests could help in âtriagingâ patients.

Mr. Ricks, the Eli Lilly chief executive, said his company took testing obstacles into account when it decided to classify high-risk patients based on age and weight. âIn a practical clinical setting, it is something that could be applied immediately,â Mr. Ricks said on the recent investor call.

Even after the right patients have been identified, more hurdles await. Patients need to be quickly sent to a clinic or hospital that can administer the treatment, and kept separate from others who are not infected. They will need assistance from medical personnel in protective gear who can insert an intravenous line and monitor them while they are being infused with the drug.

If the antibody treatments prove effective, they are expected to become more widely available by early next year. Regeneron has said it will be able to produce about 250,000 doses a month in partnership with Roche. Eli Lilly has said it will also be able to ramp up production. Another company, AstraZeneca, is also developing an antibody treatment that is earlier in its development, and it has a deal with the federal government to supply up to 100,000 doses by the end of December.

In the meantime, some doctors on the front lines say they are eager for any new tool to keep people out of the hospital.

Dr. Manar Alshahrouri is a critical care doctor in Green Bay, Wis., one of many cities in the Upper Midwest where infections are surging. The intensive care units at the two hospitals in which he works are nearly full, he said. And thereâs little to give patients who are newly sick with Covid-19 to prevent them from winding up there. âWe donât have, as of now, anything that is effective,â Dr. Alshahrouri said. âWe simply do not.â

But he cautioned that hope for a miracle cure should not be used as a crutch, and it should not replace preventive measures like wearing masks.

Keeping people out of the hospital is âa great endpoint for us as clinicians, but it is not a substitute for far more effective measures,â he said. âIf you have a flood in your basement, the answer is not more towels. The answer is to turn off the water.â 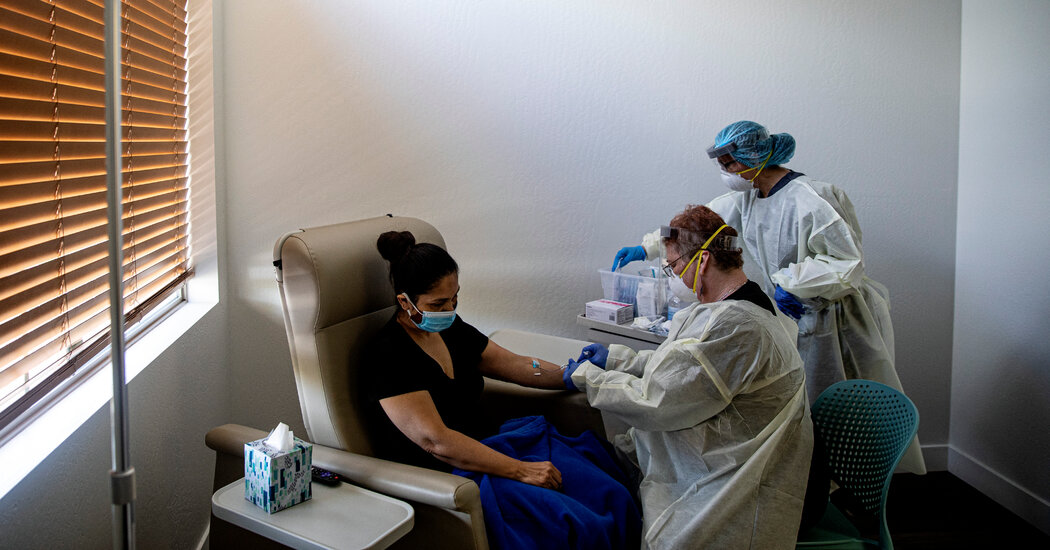